Differences between AGVs and AMRs

MiR TOP / Introduction to AMR / Differences between AGVs and AMRs

AGV is a vehicle, AMR is a robot.

Let's take a closer look at the differences between AGVs and AMRs.

See the table below.

AGV is an abbreviation for automated guided vehicle. It is also called a self-guided vehicle or automatic guided vehicle. JISD6801 defines an AGV as "a vehicle that has the function of automatically traveling in a certain area and transporting goods other than humans such as loads, and is not used on roads stipulated by the Road Traffic Act." Its definition is still a vehicle.

Among AGVs, those that do not require guide like magnetic tape (guideless) and estimate their own position based on information from built-in sensors are generally called AMRs (autonomous mobile robots). They are also called a guideless AGV and next-generation AGV. It may be considered that the concept of a vehicle that runs within a predetermined condition has evolved into a robot that moves by its own judgment.

As mentioned above, AGVs travel a fixed route set by guides such as magnetic tape. Therefore, it is impossible to navigate in a place where no guide is installed, and if there is an obstacle on the fixed route, it will stop and cannot navigate further. In order for them to move smoothly without any trouble, it is essential to secure a place with no obstacles and install guides.

On the other hand, AMRs travel on a route that they autonomously calculate according to the surrounding environment. Therefore, even if there are people or obstacles on their routes, they can handle the situation by avoiding them or slowing down. Since there is no need to install guides such as magnetic tape (guideless), it is easy to change the destination, and it can be changed according to the situation. This makes it possible to deploy these robots in new places where no AGVs have ever been deployed before.

* The differences between AMRs and AGVs that have been explained so far are summarized in the figure again.

AMR is a robot developed to work with humans.

The development concept of AGVs and AMRs is also very different.
In contrast to an AGV, which is a vehicle that simply "carries things from point A to point B," an AMR is essentially a robot that "carries things in a place that it shares an operating range with people."
An AMR has the great advantage of being able to build a "relationship in which humans and robots complement each other."
Due to this difference, an AMR is not a variation of AGVs, but it can be regarded as a completely new existence that is different from AGVs starting from the design concept up. 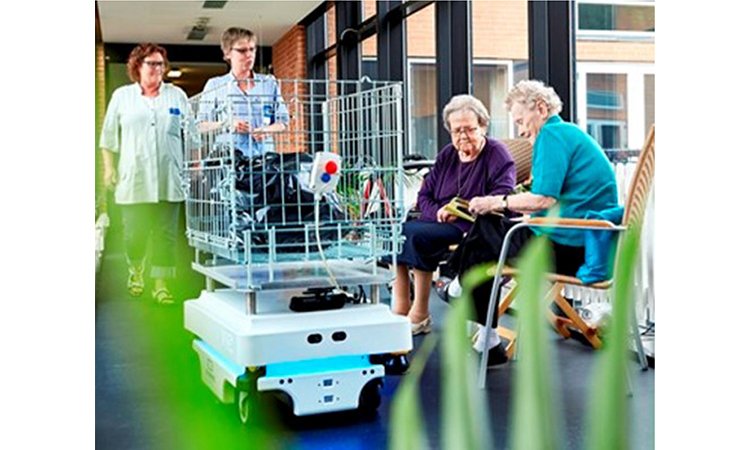 Did you understand the differences between AGVs and AMRs? One is a vehicle and the other is a robot. Even if they look the same, what they are is completely different.